So many of us have memories of Old Monk, communal and individual, professional and personal, and all those memories somewhere in-between.
The one I want to share here happened in October 2020, when we expected that she might only have a few months left after her cancer had metastasized.
Old Monk decided the time had come to clean out her writing studio where she led numerous writing workshops, facilitated book and poetry discussions, and spent hours writing in solitude, too. She asked me to help her with the task.
So, on a Monday afternoon we took some boxes to the classroom-turned-artist studio at St. Mary's School. There, there were so many books of poetry, books on teaching poetry, books on writing, so many books. But, among the books were so many ideas. On one piece of paper scattered among many, as though it were nothing, I found in her scratchy scribble, "COLLEGE FOR POOR." Then, there was a list underneath:
Philosophy
Art History
Logic
Rhetoric
Poetry
American History
30 students
2 nights a week/90 minutes
The paper was caught between others, as though it were nothing, but it was illustrative of Old Monk's life: big ideas. Yet, it was just another idea among many of hers that would add something beautiful and just to the world.
That was Old Monk's life, adding beauty and justice to the world as a sign of God's love for us all. And doing it in a uniquely creative and prophetic way.
At one point, after we had boxed up the things she wanted to keep, Old Monk went to sit down. She said to me, "Come, sit down. Let's let our souls catch up to us."
Mary Lou did so much in her prodigious lifetime; I was fortunate enough that my life crossed her own, even if only at the very end. And even though she did so much: advancing movements and holy ideas, creating communities and ministries, writing books and poems and pamphlets and reflections, she still found a way to let her "soul catch up to her" each day with a disciplined morning routine of prayer and reflection. And all she did was done with such fidelity to and integrity for life. Her life reminds me of the quote about Saint Scholastica, Benedict's twin sister: She could do more because she loved more.
In that same afternoon, she put on a hat that had been sitting on a shelf in her studio. It said "Art—Break the Rules." She loved art, and she loved breaking the rules. I asked her for some bit of wisdom; I don't even remember the exact question, but she replied, wearing this ridiculous-but-perfectly-suited-to-her-personality hat and that characteristic grin.
"You gotta keep choosing life." 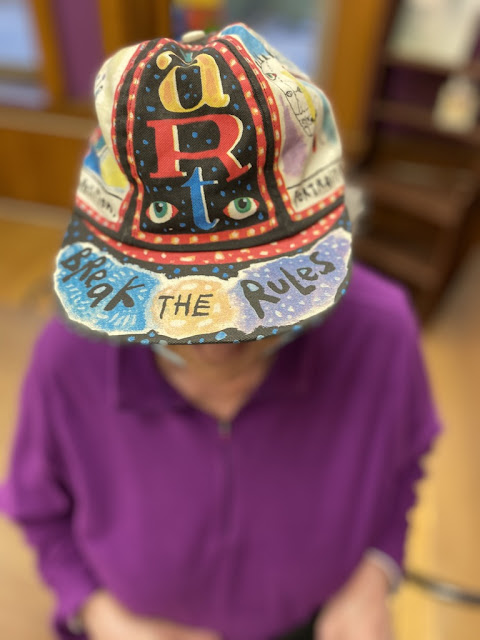 +++
Of course, Mary Lou did keep choosing life. She fought death all the way to the end; she fought death for two years more than her terminal prognosis. She fought death in so many ways throughout her 81 years here on earth. She committed herself to giving life to community, to the poor, to the nonviolent moment, to the gospel message, to furthering the cause of women (especially in the Church), to art, to feast and family, to all these parts of life that she cherished.
+++
Old Monk loved ginkgo trees, too. I saw this one during a walk on a fall afternoon in the city she loved so much.
On the Smithsonian Education website, it reads:
In Japanese decorative art, the ginkgo’s distinctive fan-shaped leaf has carried symbolism along with its singular beauty: the ginkgo has been a symbol of longevity (the tree can live for a thousand years) and of a more profound endurance (four ginkgos survived the blast at Hiroshima and are still growing today). 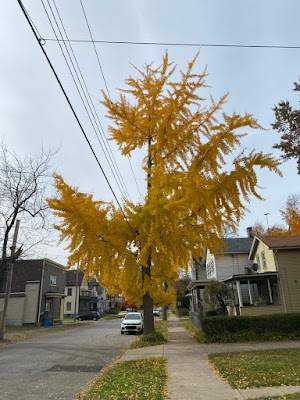 +++
a more profound endurance
and a more profound way of living
she could do more because she loved more
that was mary lou kownacki.
+++
Let us walk in the holy presence.
at January 08, 2023

You know those alarm clocks that allow you to "wake up" to the sounds of nature. I had one as a kid, and I remember choosing the ... 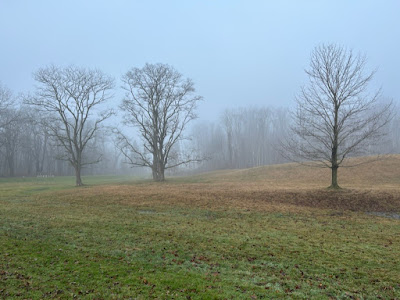 Val
I am a member of the Benedictine Sisters of Erie. I work for Emmaus Ministries: a soup kitchen, food pantry, after-school children's program, woman's advocacy, and inner-city garden.